Quick and simple to put together, this Baked French Toast with Blueberry Maple Syrup is sure to be a new favorite.

Quick and simple to put together, this Baked French Toast with Blueberry Maple Syrup is sure to be a new favorite.

Most of the work is done the night before, so it’s a great option to feed a crowd on a Sunday morning.  It doubles as your new favorite dessert too!

I’m calling this recipe baked French toast because I usually make it as a breakfast dish, but it could also be called bread pudding.  I spent a lot of my life being put off by the idea of bread pudding because let’s face it, the name is a little off putting(or off pudding - get it?).

I think I should start a campaign to change the name to something like “super awesome delicious dessert that you wont be able to stop eating” because that’s much truer to what this dish actually is.

Or you could just call it “baked French toast”, which is ALSO what it is.

French Bread (or other bread of your choice)

Do you have to make the French Toast ahead?

I recommend making the dish the night before and letting the custard mixture really soak into the bread, but you can absolutely make this the same day.  If you make it the same day you bake it, let the mixture sit for at least 30 minutes before baking.

This dish reheats really well – you can either microwave it for 30-60 seconds, or you can place it in the oven on 350, covered in foil until warmed through.

Can you use a different kind of fruit?

If you don’t like blueberries, I don’t recommend replacing them with other fruit – most other fruit that works as French toast topping doesn’t go quite as well with this sauce, but you can use just straight maple syrup and some powdered sugar on top. 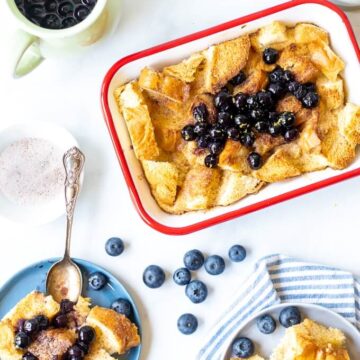