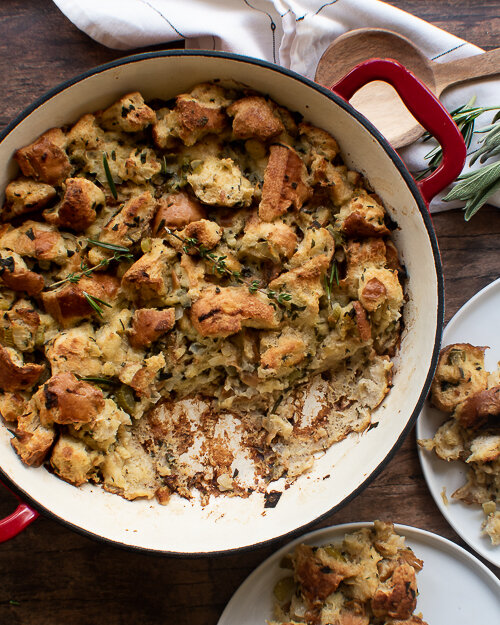 Last year while I was agonizing over what to make for Thanksgiving, and before Bon Appetit became the problematic mess it is today, I was watching the Making Perfect Thanksgiving series on their You Tube Channel. Chris and Rick were tasked with making the perfect stuffing, and what they came up with looked great, but during the video they mentioned a recipe that had been featured in the magazine in years past called “simple is best stuffing”. I immediately googled it, and found basically the stuffing recipe of my dreams. It’s a bit of time to make, but the steps are easy, and the end result is a showstopper of fresh herbs, custardy bread, and the feeling of going home to Grandma’s for the holidays. The ingredient list is short, so it’s important to use good quality. This isn’t a dish where you want to sub dried herbs for fresh.

My family is full of traditionalists, so we went with my mother in law’s stuffing for Thanksgiving, but I made this once for my husband and myself and then again for Christmas dinner. I’ll make twice again this year, at least.

Honestly, this is an amazing recipe, and everyone should try it at least once. 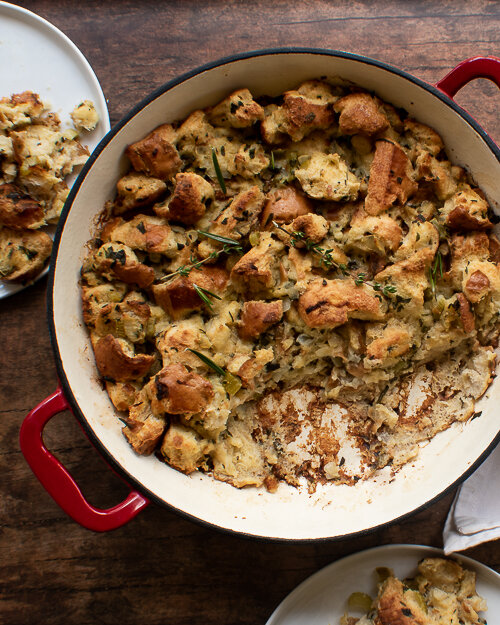 If you’re making this for actual thanksgiving, you can partially make it the day before - take this recipe through step 3, and then put it in the fridge covered. When you’re ready to finish baking it, remove the foil, and bake for 50-60 minutes.