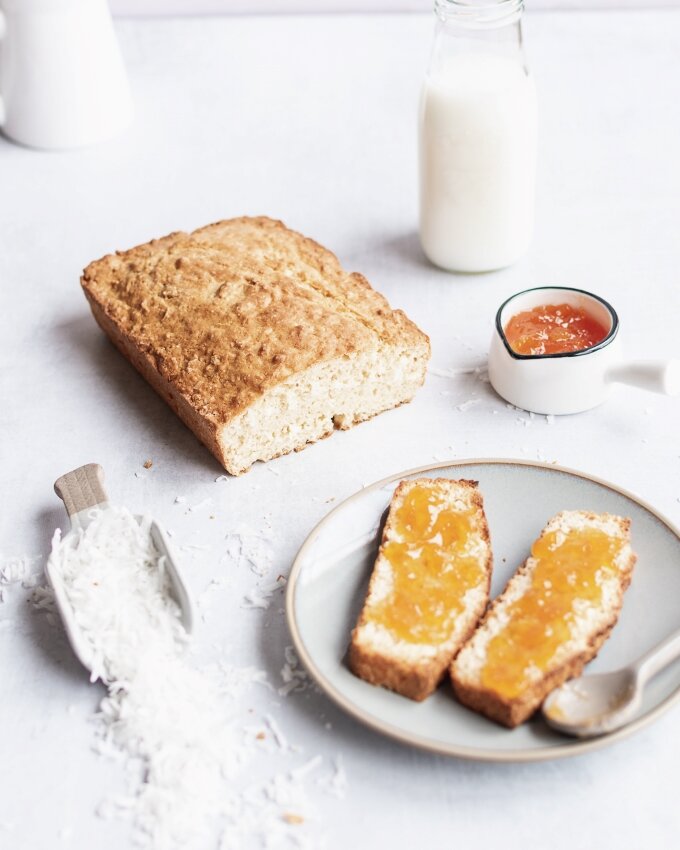 This is another recipe from the box of recipes left to me by my grandmother.  The recipe is two pieces of paper cut out of a magazine and taped together, and she’s got a thin pink highlighter line through the title of the recipe.  I’m not sure what that means.  Most of her recipes have little notes on them, but this one just has this plain pink line.

I’m going to be honest and tell you that the only reason I made this recipe was because I was bored one day, and I just happened to have all the ingredients.  I also had the ingredients for Apple Walnut Squares (which you’ll see at some point) but this recipe seemed easier.

The recipe calls itself Coconut Bread, but it’s really more a cake than a bread.   I guess you could call it a quick bread and that would be accurate.  A quick bread is a bread made with a leavening agent (baking powder or baking soda) that causes it to rise rather than using yeast and having to go through the multiple rise process that most breads employ. 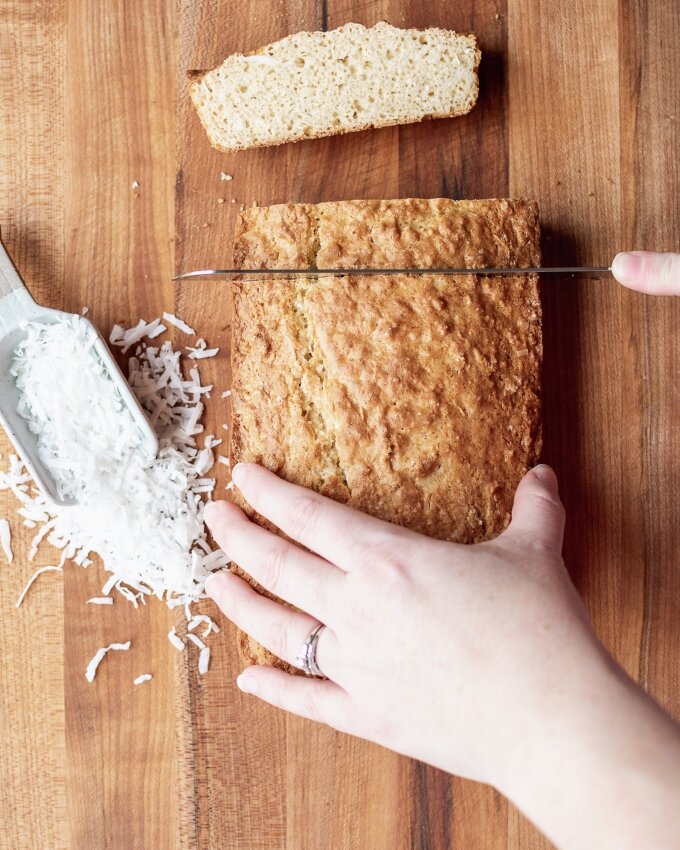 This coconut bread is also very dense and a little on the dry side when eaten on its own.  You are far better off treating this like bread and spreading it with a little butter and some sort of citrus or tropical jam.  I used apricot preserves because it’s what I had on hand, but orange marmalade would be awesome, as would some sort of pineapple jam.

While coconuts are generally pretty healthy from a nutrition standpoint, containing quite a bit of fiber and plenty of vitamins, minerals and antioxidants; they are also extremely high in fat and calories, and should be consumed in moderation.  I use unsweetened coconut in this recipe, and thought it was definitely sweet enough, but you could use sweetened coconut if you’d prefer a sweeter bread. 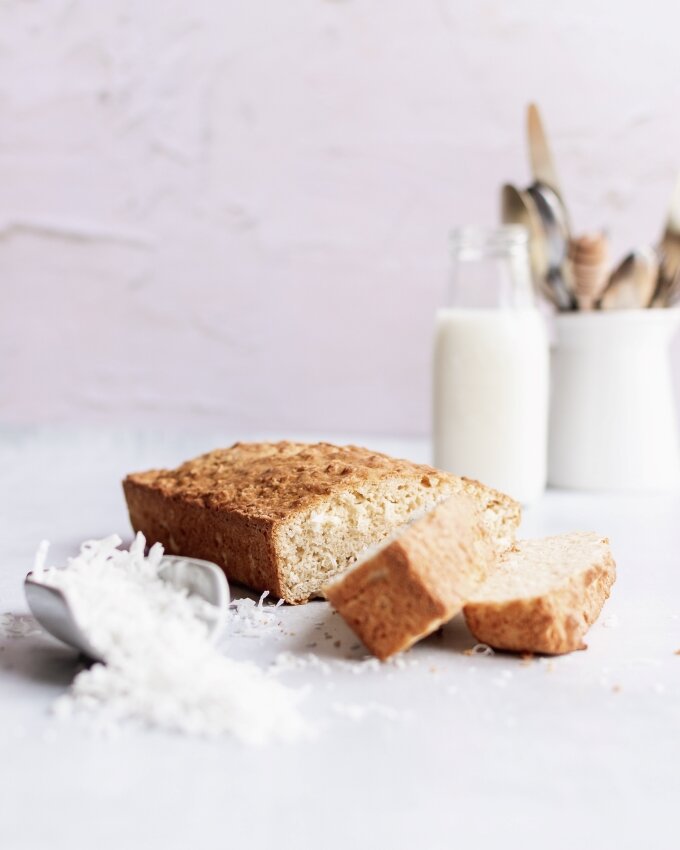 You’ll start by greasing an 8x4 inch loaf pan and preheating the oven.  Mix together the flour, baking soda, salt and sugar in a large bowl.  Add the egg and vanilla and stir to combine.

Mix in the milk and coconut.  It’s a very dry batter, and if it doesn’t fully come together, add an extra tablespoon of milk at a time until it does.

Spread the batter into the greased pan and bake for 45 minutes or until a tester inserted into the center of the bread comes out clean.

Let the loaf cool in the pan for a few minutes, and then let it rest on a rack to cool completely.  Slice, toast, butter and jam it up, and enjoy! 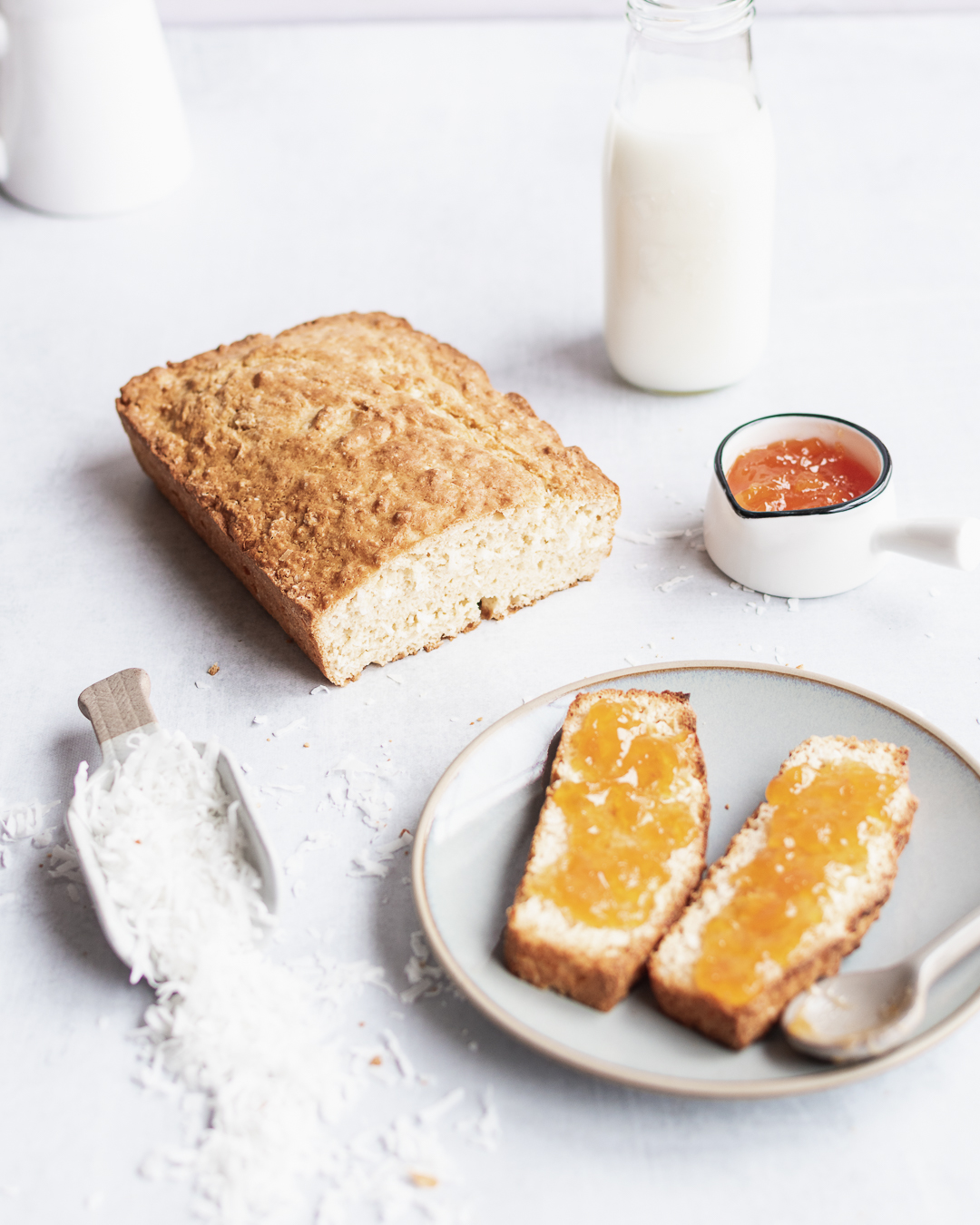 This coconut bread (cake) is perfect sliced, toasted, and served with apricot preserves.