A sturdy pastry shell containing light and fluffy peppermint specked whipped cream is a delight to your eyes and your taste buds. 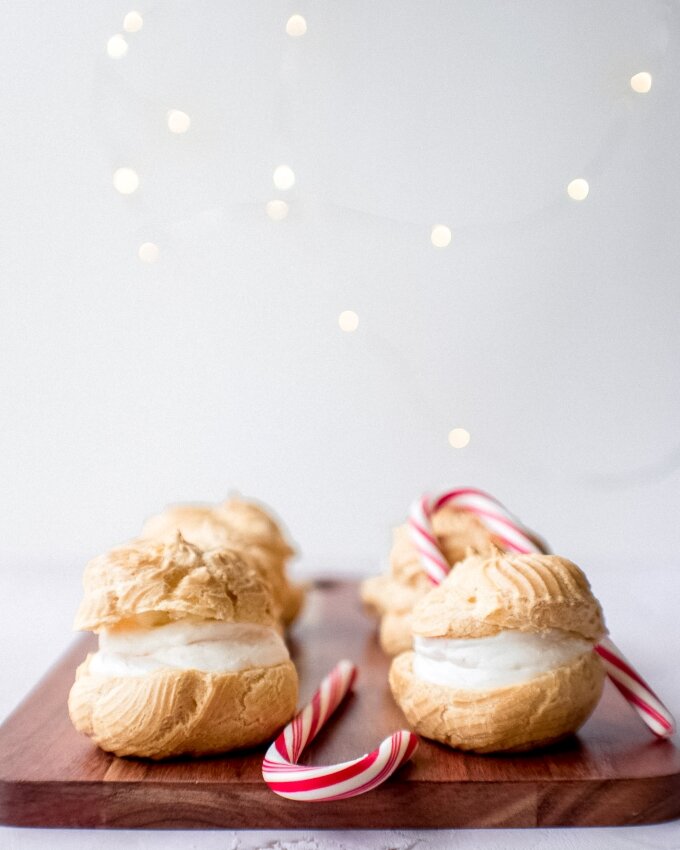 An odd combination of squat and fat, light and airy, simple and elegant; Cream Puffs are the ultimate show stopping dessert that looks like it took all day, but actually took under an hour from start to finish. A sturdy pastry shell containing light and fluffy peppermint specked whipped cream is a delight to your eyes and your taste buds.

I’m not sure when it first showed up on Netflix, but I started watching Great British Bake off the year that Martha was on. She’s adorable, and I still think she should have won. I’ve watched on and off ever since, and like the rest of America, I’m fairly obsessed with these charming Brits who are so freaking nice to each other. As a baker, I spend a lot of my time wondering how I’d do on the various challenges and wondering why the heck the contestants don’t bone up on as many esoteric baking strategies as they can before they arrive.

One of the bakes that has always fascinated me is anything involving Pate a Choux or Choux dough, or Choux pastry.  Whatever you want to call it, it’s seemed foreign and fancy and scary and unmanageable to me.  The GBBO contestants are always talking about how finicky it is to work with.  And if Britain’s greatest home bakers can’t hang, then what chance does little old me have?  I mean, really.  So, Choux pastry has just sat on my baking bucket list for years, languishing with other intimidating bakes – homemade pretzels, bagels, and donuts to name a few – just waiting to be crossed off.

A FEW OTHER RECIPES TO TRY:

When I started Sara’s Tiny Kitchen, one of my goals for it was to start crossing off these bucket list bakes.  And I haven’t made the donuts or bagels yet (although pretzels are happening very soon) but I finally crossed Choux Pastry off my list, and I have to say….it wasn’t that hard.  I had definitely built it up in my head to be far more difficult than it actually was.  I don’t know if that’s a me thing (reformed ADD kid over here) or if everyone does this.  Things are almost never as difficult as I think they’ll be. 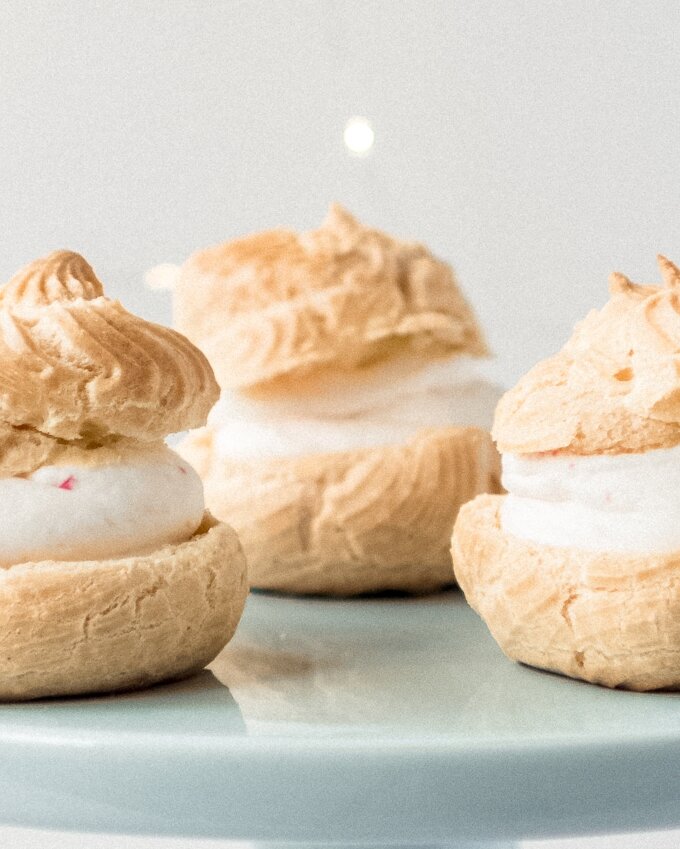 The dough is as simple as it can possibly be.  Flour, butter, eggs and water mix together and rely on steam rather than leaveners to rise.  Once you have the basic dough down you can create sweet or savory dishes.  I made cream puffs with mine, but I think they’d be amazing stuffed with meat and cheese as well. You can make eclairs, profiteroles (just cream puffs with ice cream instead of whipped cream), croquembouche, and they’re thfe basis of beignets as well.  I think that’s the beauty of a lot of classic French foods, don’t you?  The simplest ingredients create the most stunning dishes.  The interesting thing about Choux is that you essentially cook it twice.  Or well, you cook it and then you bake it.

Because this was my first time making them, I wanted to stick with a recipe that I knew was sure to work, so I went with King Arthur Flour – they’ve never steered me wrong before, and they didn’t this time either. 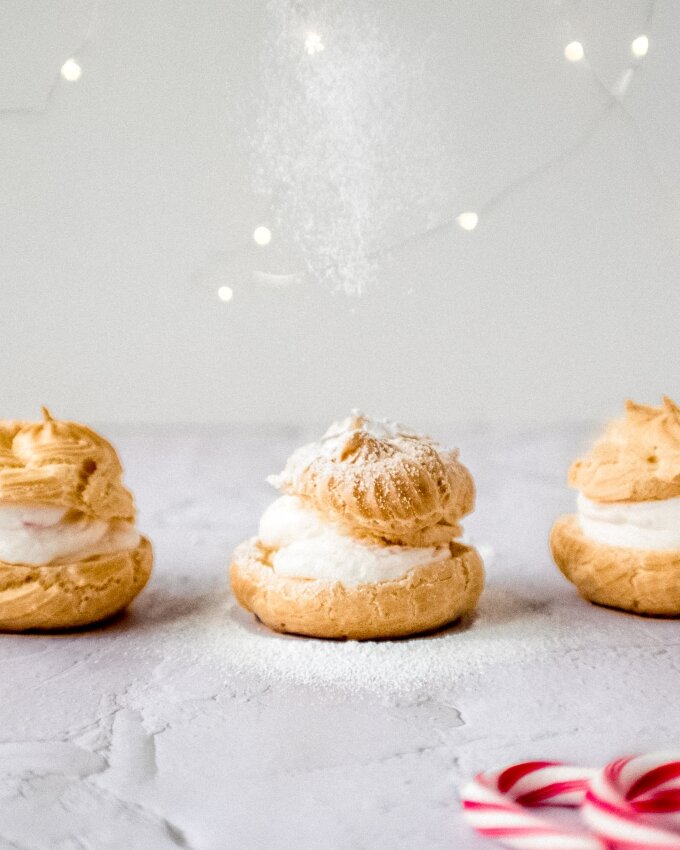 So if you’ve been putting off Pate a Choux like me, I would urge you to give it a try.  In less than an hour, you’ll have a delicious treat that is sure to wow at even the fanciest dinner party (remember dinner parties??  Le sigh). 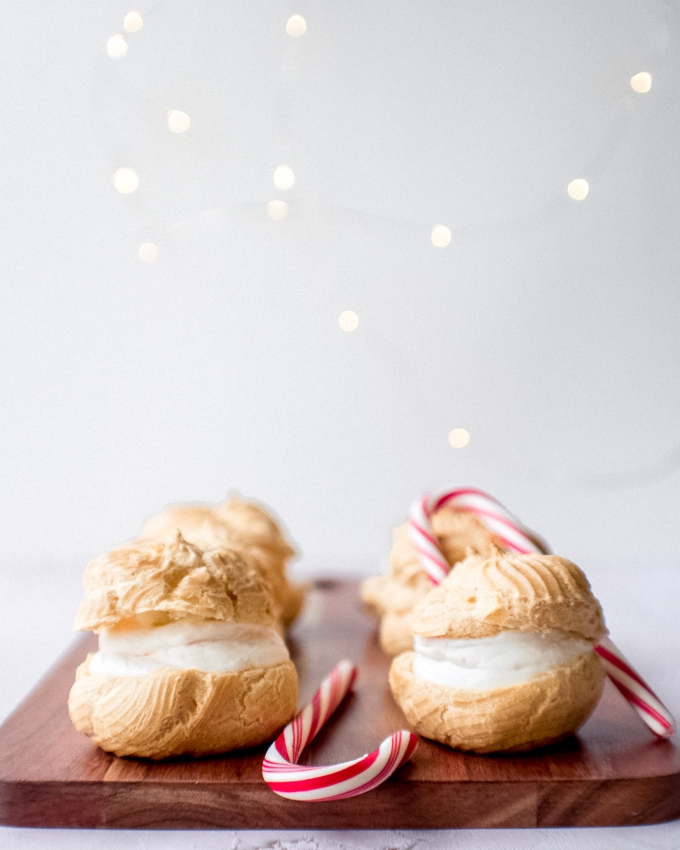 A compelling combination of squat and fat, light and airy, simple and elegant; Cream Puffs are the ultimate show stopping dessert that looks like it took all day, but actually took under an hour from start to finish. A sturdy pastry shell containing light and fluffy peppermint specked whipped cream is a delight to your eyes and your taste buds.

Rather than using a scoop to form these you could possibly pipe it with a piping bag, but it's a very thick batter, and it's not easy. 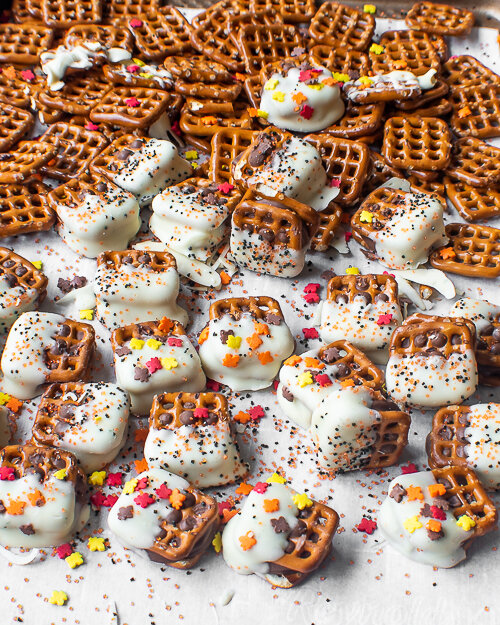 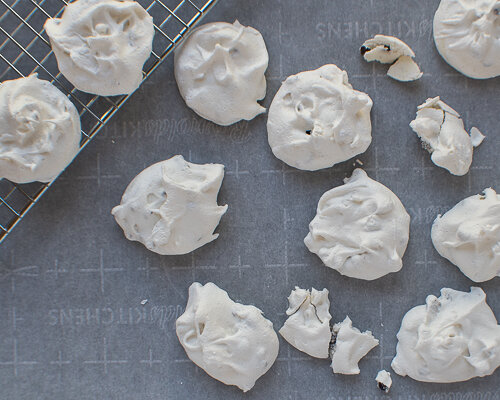