I’ll come right out and admit that I’m a total wimp when it comes to spicy foods.  My mother in law makes chili every year for the first football game of the year, and she ends up making two batches – one is a non-spicy version for me and my two nephews, and then a regular spicy version for everyone else.  I just don’t have a taste for heat.

One thing I really do like though is hot honey.  I discovered it a few years ago, and absolutely fell in love with it.  My only issue is that the spiciness levels vary so much from brand to brand, and even sometimes in the same brand.

I wanted to be able to control the level of spiciness and so the only thing to do was to learn how to make it myself.

Turns out, it’s crazy simple and takes about 5 minutes.

Highlights of Making your own Hot Honey

So, when I make hot honey for myself, I use two serrano peppers and one habanero pepper.  I find that combo of peppers makes for a honey that’s spicy enough that I can tell the heat is supposed to be there, but that isn’t overwhelmingly spicy.  Making it this way gives you a honey that starts off sweet, then gives you heat, and finishes with a sweet sort of peppery-ness.  It’s really fantastic.

If you’re a person who likes a way hotter honey then use all habanero peppers, or an even hotter pepper.

If you’re a person who likes things a little less spicy, you can swap the serranos for jalapenos or leave out the habanero and keep the serranos.  Its really completely up to you how hot to make the honey.

Making your own honey is WAY more economical than buying it in the store.  I just use the store brand honey which costs less than 4 dollars, and the peppers end up costing less than a dollar.  So for 5 dollars I have my own honey which is about half the price you’d pay for a similar amount of the leading brand of hot honey.

To make this hot sauce, you literally just throw the honey and the peppers in a pot, and simmer the honey for 5 minutes, then strain the honey through a strainer to catch any pepper seeds.  Easy peasy lemon squeezy!

Normally honey never expires, but given that even with the straining, there are little, microscopic food particles in the honey, you can’t keep this forever.  About three months in the fridge is about as far as you want to push it.

What is the Scoville Scale:

The Scoville Scale is defined as follows:  a measurement of the spicy heat of chili peppers or other spicy foods as reported in Scoville Heat Units, which is a function of capsaicin concentration.

This is basically a fancy way of saying that the more capsaicin (which is an ingredient found in peppers and other spicy foods, where they get their heat) a pepper has, the hotter it will taste.

Standard green peppers have 0 Scoville Heat Units (SHU’s).  Jalapenos have an SHU rating of between 2500-8000.  Habanero peppers are between 100k and 350k SHU’s.  Ghost Peppers average around 1 million SHU’s.  So as you can see, there are a WIDE variety of hotness in peppers, and a wide variety of hotness in hot honey.

How to Use Hot Honey: 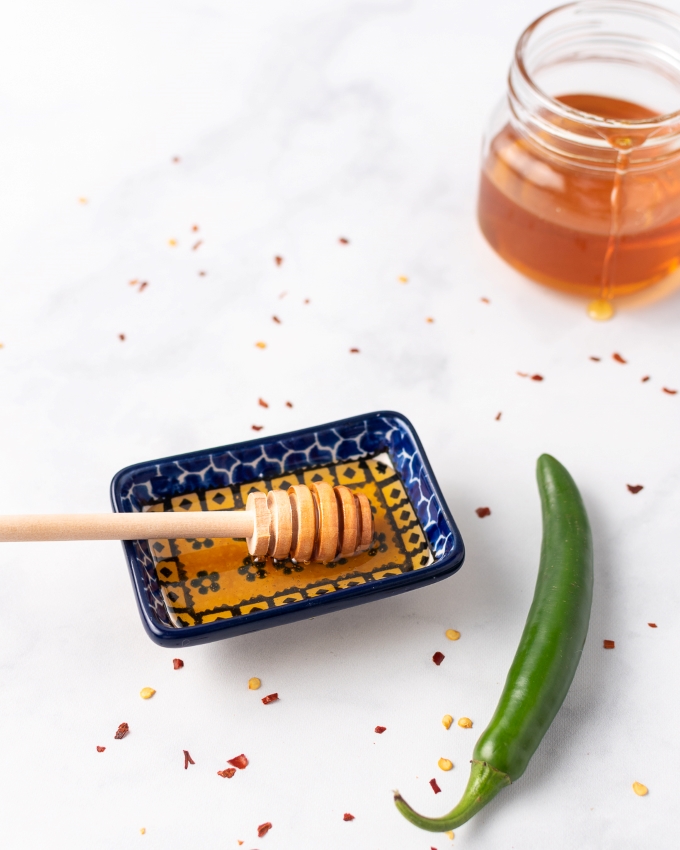 If using very spicy peppers, use gloves when cutting them, and make sure to wash your hands thoroughly afterwards.