Thick, fluffy, pillowy homemade marshmallows are one of the best treats I can think of. In this post, I'll teach you how to make marshmallows from scratch!

Thick, pillowy, fluffy homemade marshmallows made from scratch are one of the very best (and surprisingly easy) treats you can make for yourself or your loved ones this holiday season.  The recipe makes a ton, and they last for weeks when stored properly.  You’ll never want to go back to store-bought marshmallows again!

These are perfect to add to a holiday cookie box this season – they’re actually much simpler to make than you would think.  Or at least than I would think.  The recipe falls into two parts in my mind – the sugar syrup part, which is strictly an adult only job.  Then comes the marshmallow spreading part which would be a great way to involve the kiddos in holiday baking!

My mom also says that these are the best marshmallows she’s ever had, and she’s clearly not biased in any way. 😉

Flavor:  the flavor of these is like any marshmallow you’ve ever had, but somehow also, more?  They’re incredibly rich and decadent and thanks go my secret ingredient they’ve got a strong vanilla flavor.

Texture:  they’re soft and chewy with just a little bit of resistance when you bite into one.  If you want an even softer marshmallow, you can leave the out one of the packets of gelatin.  The marshmallows will still be set up enough to cut, but just barely.

Ease:  I’d give this recipe a 5/10 on the easiness scale, and the only reason it’s not a 3/10 is because of the boiling sugar mixture part of the recipe.  Anytime you’re working with hot sugar, all of your focus needs to be on it, and making sure it doesn’t spill and burn you.  A sugar burn is far worse than a burn with boiling water.

If you have leftover marshmallows you can use them by making my Indoor Raspberry S'mores Recipe or by making some Giant S'mores Rice Krispies Treats.

They are not.  The gelatin contains animal by-products.  I haven’t tested this myself, but there is a product called agar-agar that is vegan and apparently works very similarly to gelatin.

Do these marshmallows toast well?

They sure do!  Just like any store bought marshmallow, all it takes is a little heat, and they get nice and brown and toasty!

How many marshmallows can you get from this recipe?

Depending on how big you cut them, anywhere from 48-72.

Can you substitute the corn syrup?

Absolutely!  You could use maple syrup or honey, both of which would flavor the marshmallows and make them totally different and delicious.  You could do half and half molasses and corn syrup which would give you a sort of gingerbread-y flavor.  Trying new things is what it’s all about!!

Cut the marshmallows into your desired shape, and then store any leftovers in an airtight container.  They can take on the flavor of a plastic container, so use a glass container if you can.  Layer sheets of parchment paper or waxed paper between the layers to avoid sticking. 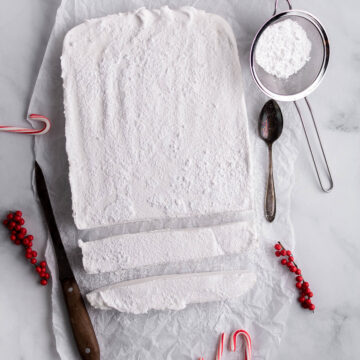 How To Make Marshmallows from Scratch

Thick, pillowy, fluffy homemade marshmallows made from scratch are one of the very best (and surprisingly easy) treats you can make for yourself or your loved ones this holiday season. The recipe makes a ton, and they last for weeks when stored properly. You’ll never want to go back to store-bought marshmallows again!
Print Recipe Pin Recipe
Prep Time 10 mins
Cook Time 15 mins
Course Dessert
Cuisine American
Servings 60 Marshmallows