A comforting pasta dinner that comes together in less than 20 minutes and transports you to the Italian countryside....what could be better? 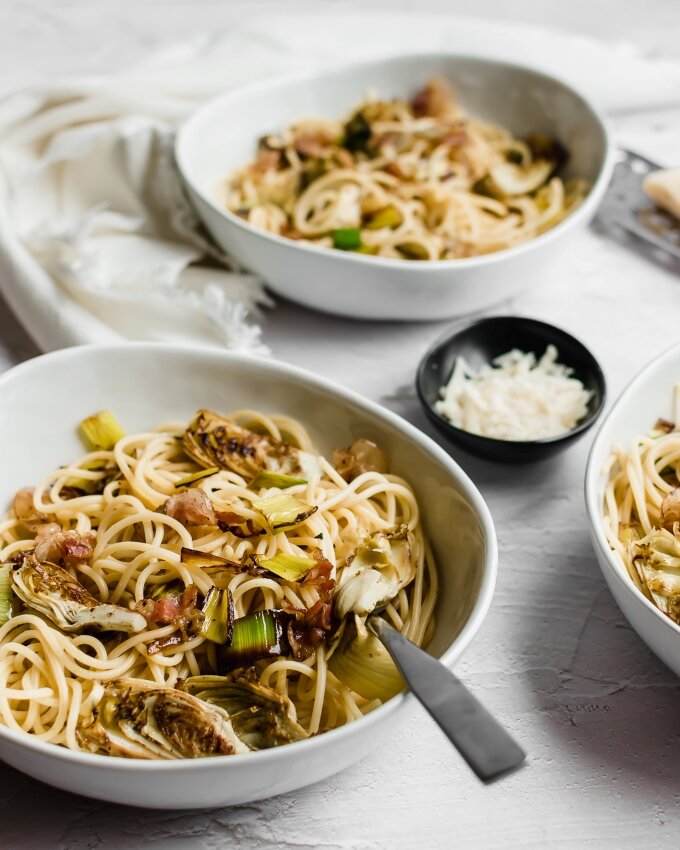 There are a few things in this world that are guaranteed to comfort me.  A trip to Trader Joe’s.  Watching through Parks and Recreation for the dozenth time (skipping season 1, natch).  Hugging my husband at the end of a long day.  A giant bowl of pasta.  It doesn’t even matter what kind of pasta.  I’m an equal opportunity pasta lover.  Spaghetti, rotini, farfalle, linguine…..they’re all amazing, and all one hundred percent deserving of my love and adoration.

This recipe is one of those recipes that sort of grew over time.  I didn’t set out to make a recipe, and I’m sure I’m not the first (or even hundredth) person who realized that artichokes and leeks work well with pasta and cheese; but it IS one of the first recipes that I came up with completely on my own, and she’s sort of like my baby that way.

I actually had a hard time putting pen to paper (virtually) to write this one down, because I honestly usually change it every time I make it.  It works well with both long and short pasta.  It works with the pancetta or without it.  Sometimes I add a splash of wine to the sauce, and sometimes pasta water.  It’s an ever-changing recipe, but it’s so damn good that I have to share it. 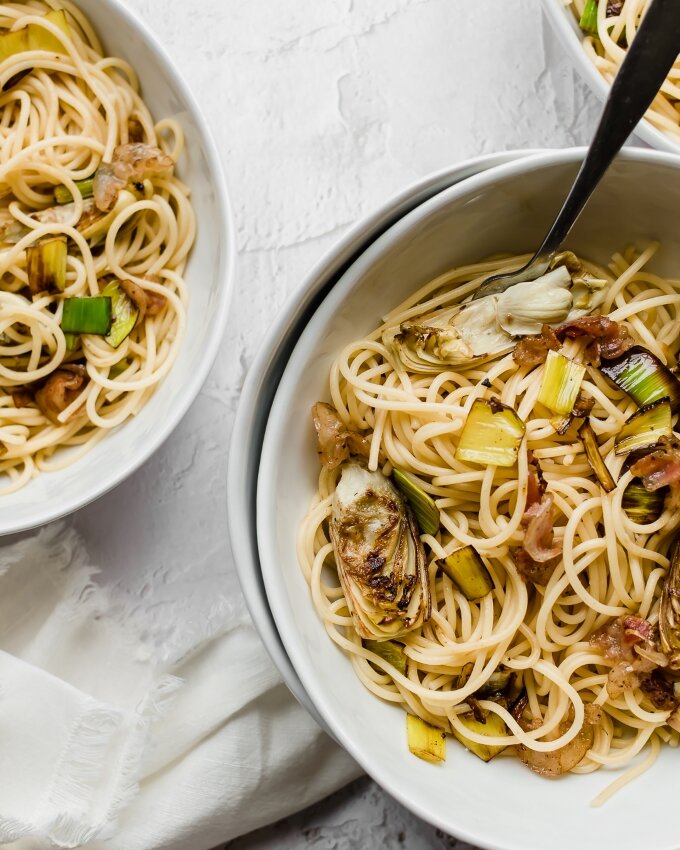 Leeks are one of those ingredients that everyone has heard of (potato leek soup, anyone?) but not everyone has cooked with.  They come across as slightly intimidating – at least they did to me – and I had always heard how hard they were to clean (not true) and therefore avoided them for a good long time.  When someone eventually invents time travel, you can bet I’ll use it to spend more time eating the foods I once thought of as gross.

Leeks are part of the allium family, related closely to onions, shallots, garlic and chives.  They have a sweet, oniony flavor that is mild but deeply flavorful at the same time.  While I wouldn’t say that you could use them interchangeably with onions, I would definitely feel fine replacing shallots with leeks in any recipe that calls for shallots.

How To Clean Leeks

Typically made from pork belly and cured with salt, pancetta is the perfect little flavor bomb to add to this pasta dish.  If you cant find pancetta, bacon will work as well, but will have a smokier flavor.  You could also use prosciutto.  It comes from a different part of the pig, and has a completely different flavor, but it’s equally delicious.

*You could also use mushrooms in the place of meat in this dish and make it vegetarian. 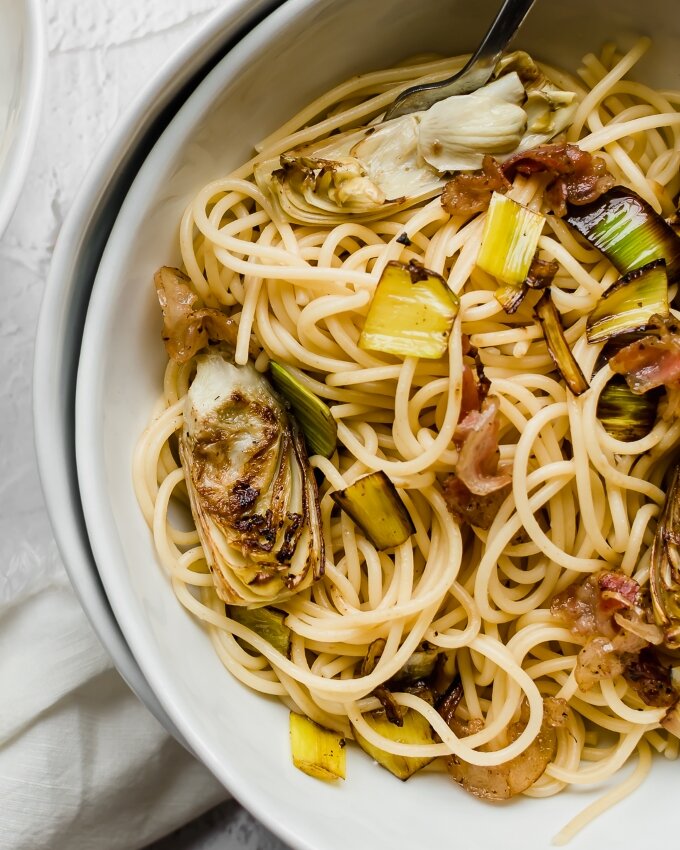 In a large pot, boil water and cook pasta until al dente.

Drain the cooked pasta, reserving at least a half a cup of the pasta water.  Set cooked pasta aside. 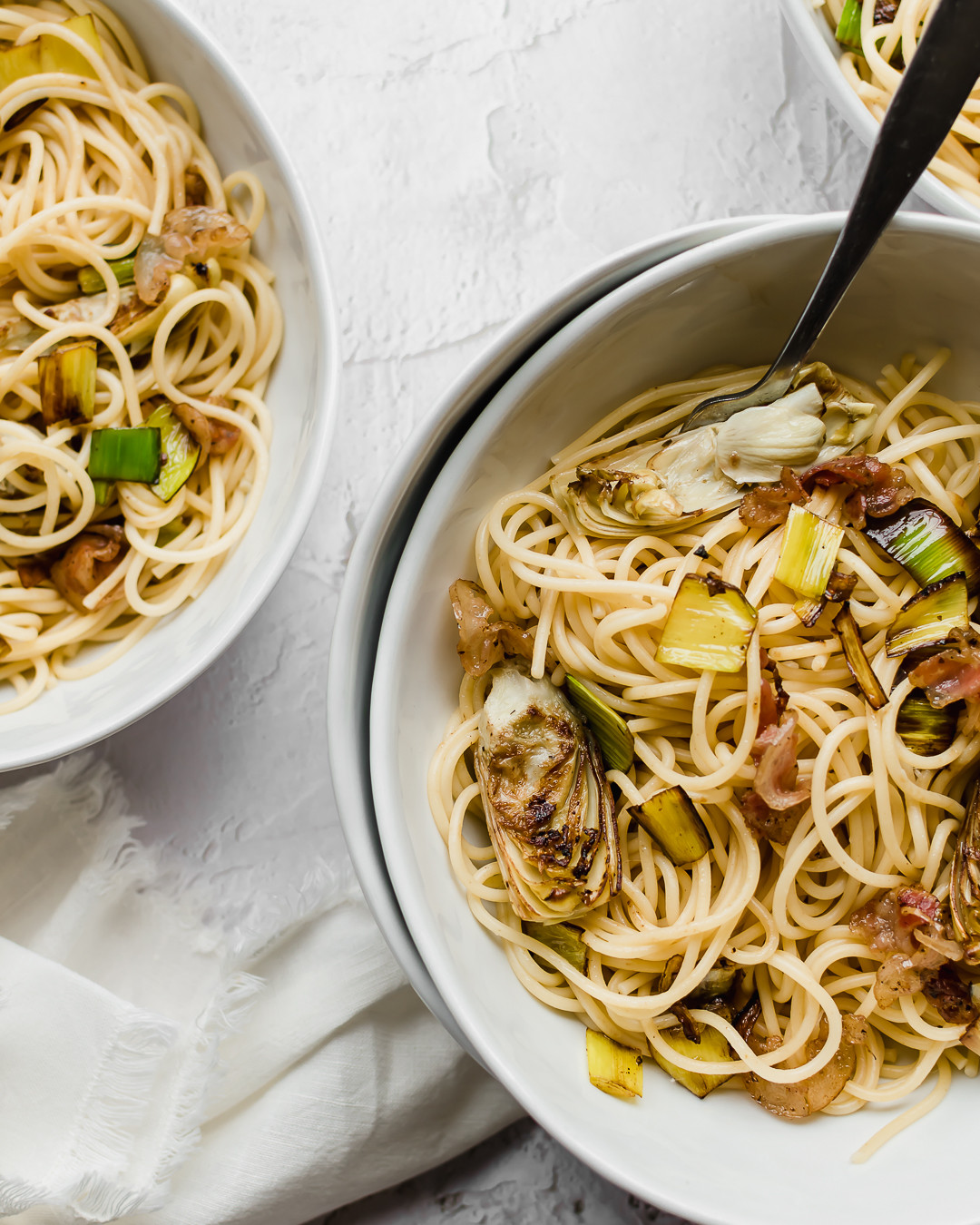 Pasta with Pancetta, Leeks, and Artichokes

A comforting pasta dinner that comes together in less than 20 minutes and transports you to the Italian countryside....what could be better?

Pasta with Pancetta, Leeks, and Artichokes