Thick peppery milk-based gravy is slathered over tender buttery biscuits for an amazing 20 minute breakfast or breakfast for dinner. 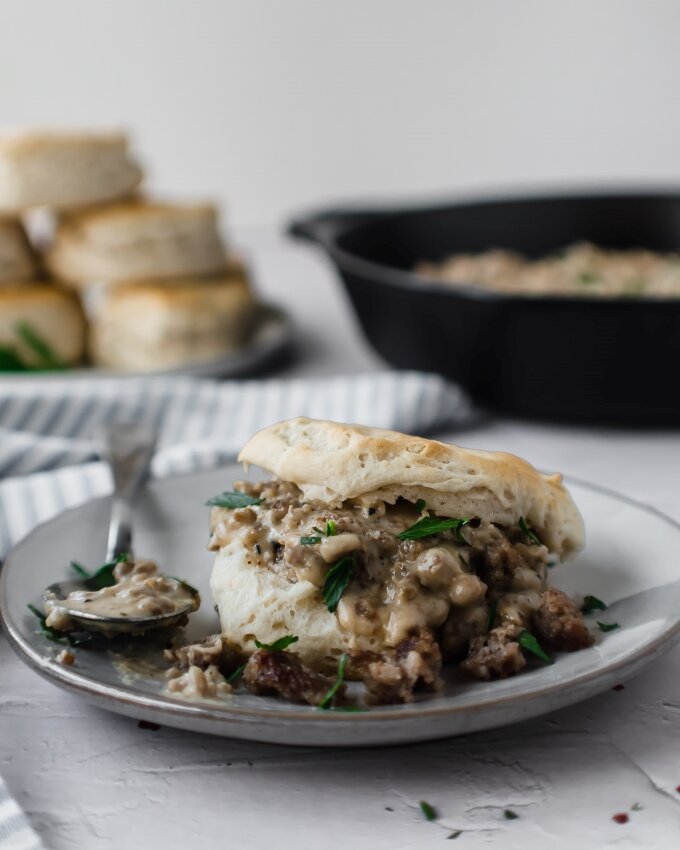 Today is National Biscuits and Gravy Day.  As a food blogger, every few months I go through and jot down the different food celebration days that I may want to try to come up with a recipe for, and when I saw today’s subject, I almost went right past it.

There’s a reason why most of the incredibly successful food blogs and instagrams are baking focused.  It’s easy to make a plate of brownies look good.  A cake is going to be gorgeous even if you have little to no skill with a camera.  Cookies basically take pictures of themselves.

Other Quick and Easy Weeknight Recipes

Savory foods are harder.  They don’t photograph as well, and they honestly just don’t look as appetizing.  You really have to WORK to get picture of savory dishes to come out looking good.  And then you add into it the fact that a lot of savory food, while delicious, is just not attractive….you’re already behind the 8 ball before you’ve even started.  So yeah, I almost skipped it.

I’m so glad I didn’t.  This is a recipe that gets made monthly in our house.  It’s actually one of the few meals that my husband feels comfortable cooking, so when I need a night off, this is what goes on the dinner menu, because I know he wont fuss about making dinner for us.

This is just a good recipe.  It’s simple and traditional.  Spicy sausage is fried up in a pan and mixed with a white milk-based gravy that’s thick and rich and full of black pepper.  The gravy gets slathered over tender, buttery biscuits and it’s simple and sturdy and a total crowd pleaser.  It’s traditionally a breakfast meal, I don’t think I’ve ever eaten it at breakfast time.  This is always a dinner for us. 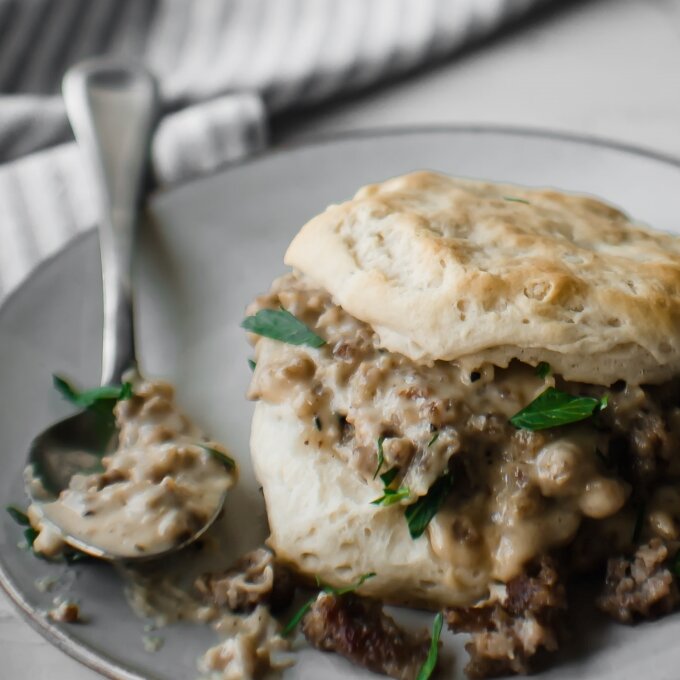 Fun fact – I didn’t have biscuits and gravy for the first time until I was well in to my 20’s.  I grew up in the northeast, and while it may be more popular now, it wasn’t something that was ever made in my family.  My husband was basically flabbergasted when he found out I had never had it before.  I blame it on the fact that there were no Cracker Barrel’s anywhere near my until I moved to Cincinnati, and I think that’s where most people probably have Biscuits and Gravy for the first time.  Okay, that’s pure conjecture, but I’m sticking to it.

Part of the fun of this meal is that you can customize it to your personal tastes – don’t like sausage?  Use bacon.  Want to give it a Latin flair?  Use chorizo.  Make it vegetarian with mushrooms as the “meat”.  And while you can absolutely make your own biscuits, I usually just buy mine.  They’re still very good, and it makes this a true 20 minute meal.

I also managed to get a pretty decent picture of this meal, which is an achievement in and of itself. 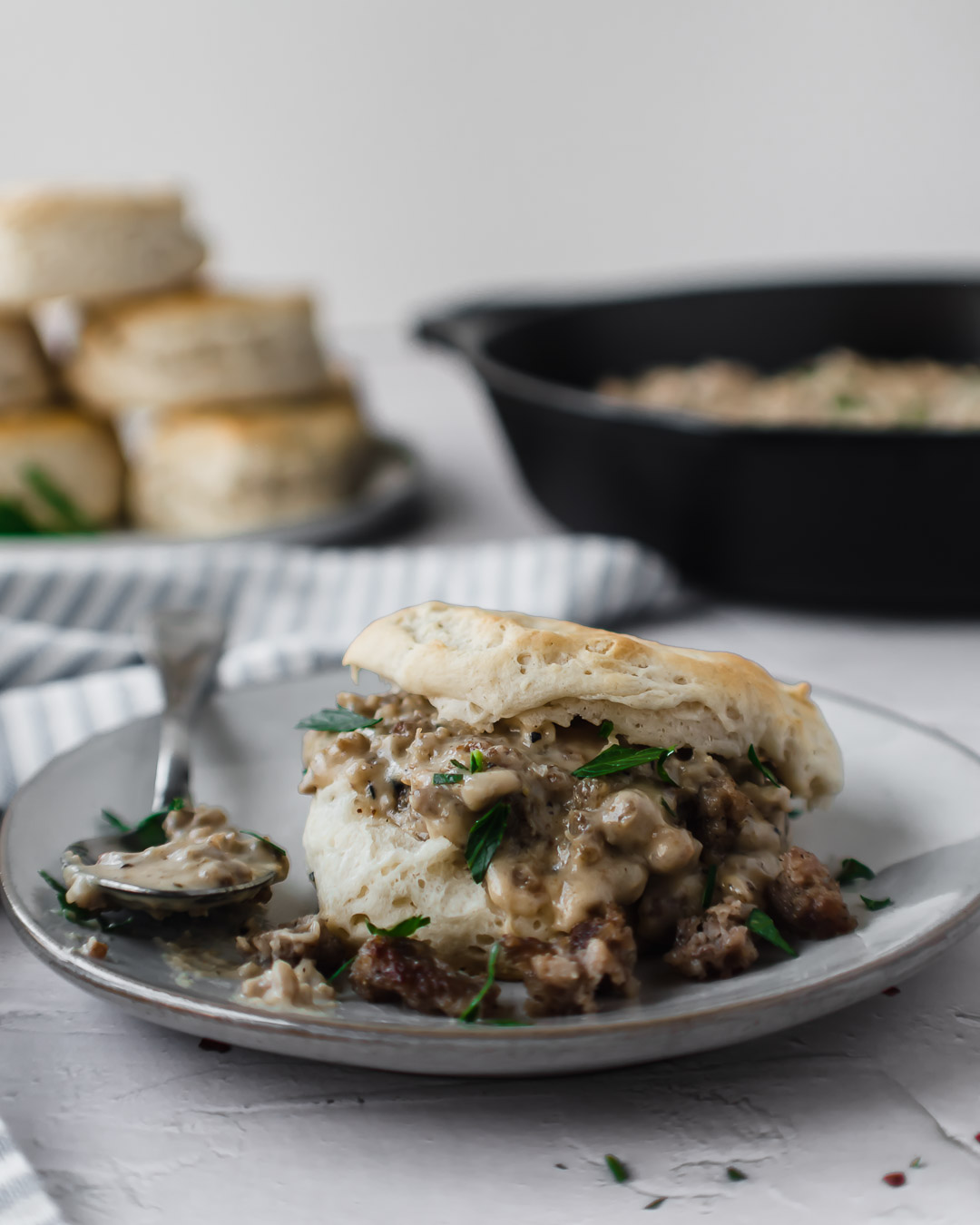 Thick peppery milk based gravy is slathered over tender buttery biscuits for an amazing 20 minute breakfast or breakfast for dinner.

To Make Biscuits and Gravy
To Make the Biscuits

*You can use whatever type of sausage you prefer. I generally just go with mild, but spicy is always a good choice. Sage is good, but I think it overpowers the gravy. Maple is AWESOME in this.

*Gravy Master/Browning Sauce - I really like the color and subtle flavor that adding this in adds to the dish, but it's totally not necessary. You can achieve the same effect by adding some extra salt and about a half a teaspoon of Worcestershire sauce.

*You can use 2% milk as well - it just wont be quite as creamy.  I wouldn't recommend going any lower than 2% for this dish - it's supposed to be in indulgence, right?

If spice isn't your thing, you can either halve or leave out the crushed red pepper.