Vanilla Pumpkin Spice Coffee Creamer is the perfect addition to your morning cup of coffee!  Full of warming pumpkin spices, vanilla, pumpkin puree and sweetened condensed milk, it’s way cheaper than a stop at Starbucks and just as delicious!

Vanilla Pumpkin Spice Coffee Creamer is the perfect addition to your morning cup of coffee!

I guess if you have to classify me, I could be considered “basic”.  I love fall.  I love a chunky sweater and boots.  I love a burning Leaves scented candle.  I love scarves and apple picking.  And I really love a pumpkin spice latte.

Ahh, the PSL.  A staple in the life of basic girls, and it starts earlier and earlier every year.  I think they started in early August this year?

As much as I love them, I do actually think they’re a touch too sweet and also a touch too expensive, so I decided to make my own version at home.

I nailed it last year with this recipe, and I knew I wanted to try to up my game this year, and I think I’ve knocked it out of the park.

Texture:  your texture is going to vary greatly depending on what type of milk you use.  I don’t actually like heavy cream in my coffee, so I usually use half and half or whole milk.

Ease:  This is SO easy to make.  You literally just throw all the ingredients together in a jar and shake it up.  You’ll need a big jar because you’re going to have about 3 cups worth of liquid.

Pro Tip: The creamer will separate into different layers as it sits in the fridge – the heavier ingredients will sink to the bottom.  Just shake the jar before using the creamer.

If you don’t have pumpkin pie spice on hand you can make your own:

If you’re not someone who does a ton of baking then aside from the cinnamon you might not have these spices readily accessible.  It might actually be less expensive to just buy pumpkin pie spice rather than 4 different spices.

Or you could just use cinnamon.  It wont be exactly the same, but it will still be delicious.

How do you store this Vanilla Pumpkin Spice Creamer?

I store it in the fridge in a glass mason jar.

How long does it last?

The vanilla pumpkin creamer will last about two weeks in the fridge.

Why does my creamer look like it’s separated after sitting?

This is totally normal.  The heavier ingredients are just sinking to the bottom.  Just give the jar a good shake shake shake before using.

Can this be made dairy free?

Definitely!  You can use the non-dairy milk of your choice.  I know that there is coconut sweetened condensed milk that’s an option, or you could make your own.  I’m not dairy free, so I don’t have a good recipe for that, but I know they’re out there.

But I don’t have vanilla bean paste?

You could substitute pure vanilla extract with no problem!
When originally mixing, make sure you use a big enough jar – this recipe makes a LOT of creamer – about 3 cups. 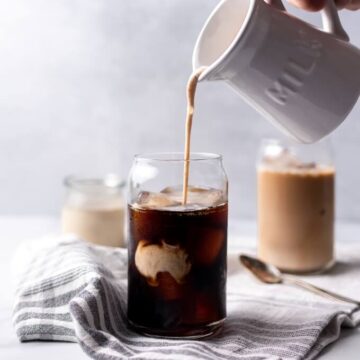